On the 23rd of September the Municipality is organizing a special commemoration to mark the 80th anniversary of the Holocaust in Vilkaviskis and they suggested posters with the names – I suggested that we show the faces of the Jewish people who were killed and they agreed. If you have pictures of your relatives who died in Vilkaviskis can you send me them scanned and with their names.

I have just received this !

July 26 – 30 Painting Exhibition “EXPERIENCES BETWEEN DEPORTATION AND THE HOLOCAUST”

August 11-19 Exhibition of professional artists The land of Sūduviai: the destinies capturing the Jewish heritage.

August 13 excursion in Vilkaviskis “Lost but not Forgotten”.

August 20 opening of the exhibition, excursion in Vilkaviškis “Lost but not forgotten” (for the public), concert of the group “Rakija Klezmer Orkestar”. Rakija Klezmer Orkestar is a group of young, professional and fiery musicians who play Jewish and Balkan music. This is probably the only group that promotes Jewish traditional music in Lithuania

To publish the life of the Jewish community in the pre-war period revealing historical facts in the Vilkaviškis region newspaper Santaka.

To install a memorial plaque for Sonija Gaskel, a Dutch ballet dancer and choreographer of Lithuanian Jewish origin.

Creative work competition “WHEN A FUNNY LAND, CHANGING THE CLOTHING AGAIN, / WILL YOU TELL ME WHO YOU ARE ?

List of Holocaust victims at the entrances to the Vilkaviškis Holocaust Memorial.

Excursion on foot around the Jewish places of Vilkaviškis with a tasting of Jewish dishes in J. Basanavičius Square.

Demonstration of old city photos on the Post Wall.

Presentation of an amateur film about Leonard Cohen.

“Two years ago I had a chance to visit Plungė where I was honoured to get acquainted with Eugenijus Bunka- The  Jakovas Bunka welfare and support fund director and the creator of the Litvak Memorial Garden. At that time he was taking us on the excursion around Plungė district and he took us to the Memorial Garden of Litvaks. That was the first time I had seen the wonderful idea being embodied by this man. To tell the truth, I was embarrassed that there was no tree planted for the Jews of Vilkaviškis. That was the moment I swore to myself I would put the idea into action. I visited the mayor of Vilkaviškis and suggested planting such a tree in the location of the former synagogue in Vilkaviškis but unfortunately, these plans were not developed further. This year when Eugenijus Bunka encouraged the citizens of Vilkaviškis to plant a tree in the Memorial Garden of Litvaks, I shared this idea with the headmistress of our school because there is a Tolerance education centre in our school  which is engaged with similar activities. The headmistress Daina Juškauskienė invited the members of our school community-the representatives of students‘ parents, the class monitors and teachers to discuss all our possibilities and hear out everyone‘s opinions on the subject. The parents, students and teachers unanimously came to the conclusion that this idea was really worth implementing. This will be not only a monument to the destroyed Lithuanian Jewish community but it will also be a possibility to visit this place while travelling around Lithuania and to be proud that the students‘ families also contributed to the realization of this wonderful idea.

This way the word became flesh. The necessary funds were collected during two weeks and in ten more days the apple tree and two apples were produced. The members of Salomėja Nėris Basis School ( students, parents and teachers) donated so that the remembrance tree would sprout in the Memorial Garden of Litvaks to commemorate the Jewish community of Vilkaviškis. The apple tree which was planted by our school community is the 58th and has got two apples on it. There are two inscriptions carved on the leaves of the brand new metal apple tree : “Vilkaviškis Jewish Community“ and “Vilkaviškis Salomėja Nėris Basic School“. 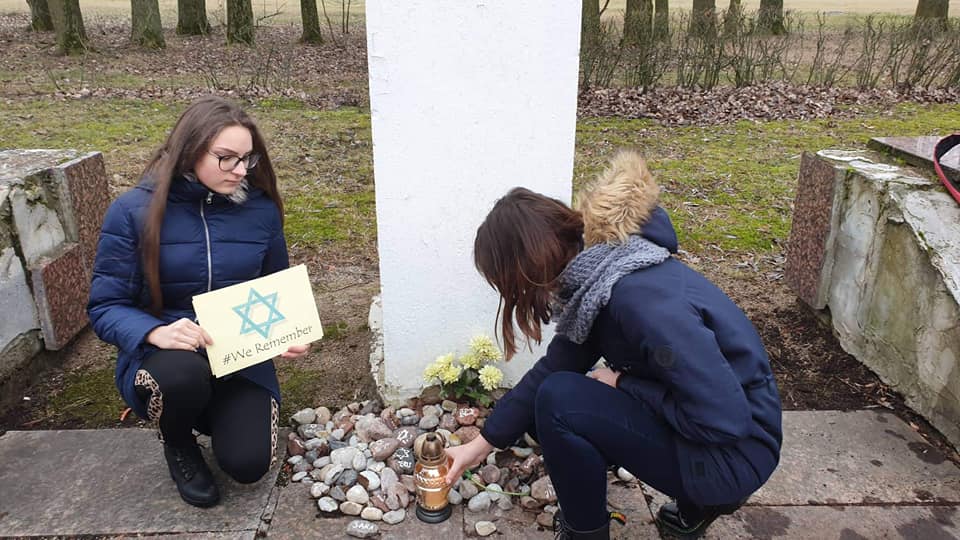 I would like to tell you about the new project for Jewish Vilkaviskis for 2020.

Although I tried to contact everyone personally – perhaps you did not get this.

Earlier this year the Director of the Visual Archives at the Diaspora Museum Mr. Haim Ghiuzeli, gave me access to the entire archives of pictures of Jewish Vilkaviskis.
These pictures will appear later at the site http://www.jewishvilkaviskis.org
Some of these pictures showed Jewish volunteer firemen from Vilkaviskis.
Together with our friends in Vilkaviskis we discussed how to best bring these pictures to be seen in Vilkaviskis today. Our desire is to create an exhibition dedicated both to the Jewish volunteer firemen of Vilkaviskis and to show a little of Jewish life before the Holocaust. The pictures will include text in 3 languages, English, Lithuanian and Hebrew.
Our dear friend Mrs. Irma Mauriene discovered that the original fire station still exists [today it is an electrical goods store] gained permission both from the owners and the Municipality to create a photographically exhibition on 3 of the unused external walls.
All the pictures are the property of the Diaspora Museum but Haim suggested that I write to you and ensure that if your ancestors appeared in these pictures, you are agreeable to their use.
Included in this mail are pictures of how the project will look and the pictures we desire to use.
You can contact me or Haim [haim@bh.org.il ]
With kindest and warmest regards and best wishes to you and your family for a wonderful Hanukkah 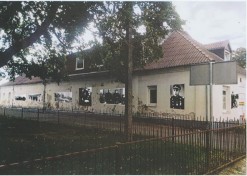 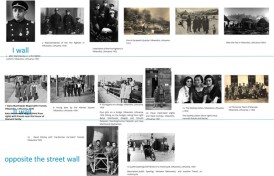 and then thought of Maccabi Vilkaviskis ! I hope this is of interest 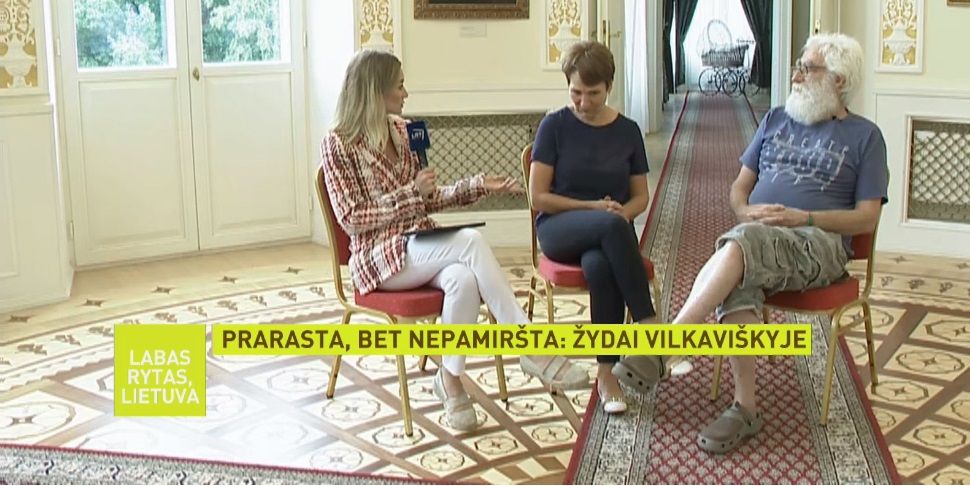 When I created grove to honor the Righteous Gentiles of Vilkaviskis I never thought I would meet one of them, and now to hear her story.

Here is her story as it appeared this week in the Vilkaviskis newspaper Santaka – thank you Kristina.

“Hiding the Jews, she lived in fear for three years”

Aldona Norvaišaityte-Radzevičienė celebrated her 92nd birthday this year, but she still remembers the terrible 1941-1944, when the Vilkaviškis region was occupied by the Germans. Then her family had to live in constant fear because the family were hiding Jews in their home for all three years.

Aldona, who lives in Kaunas with her daughter Audronė Maižiešienė, was born and raised in Smilgiai village, Pilviškės eldership. When the war broke out, she was a teenager. A small family of three people from Norvaišaičiai was living in a remote farmstead, living modestly, with only 56 acres of land

That fateful 1941 On the morning of the end of September, at the end of the third month of German occupation, Aldona’s father Juozas went to see the fields. At night it rained heavily and the farmer feared that his crops would not be covered.

Going through the barracks towards his lands, Juozas met a man who was completely exhausted. It was Alter Kirkilovsky who lived in Pilviškiai. It turned out that another 4 Jews, who had escaped from the Vilkaviškis ghetto, were hiding in the bushes just before their liquidation, during which all their other residents were killed. Refugees were so lean and exhausted, torn and hungry that they could no longer go anywhere without the help of other people. The Jews begged the farmer to either feed them or give them to the Gestapo.

While reporting on these events, A. Norvaišaitytė-Radzevičienė could not hold back tears. She remembers Dad running back home and asking Mom what to do. Uršulė Norvaišaitienė, who had been thinking for a while, said that she would take those people home, and she herself rushed to cook the bacon with cabbage. As Aldona said, at that time there were no products they wanted, people were eating what they had grown. So the Jews who were brought to the farm had to cut the cabbage fat, french fries, even though their religion forbids eating pork. In the struggle for survival, all measures were appropriate.

So, in September, five Jewish refugees, who had miraculously escaped the nails of death, were fed at Norvaišaičiai homestead: Alter Kirkilovsky, Chaim Chernevsky, as well as sisters Tsipa and Sheina Weberytes. The fifth Jew was named Kackel, but Aldona said his name was not remembered.

Refugees at Norvaišaitis received not only food, dry clothes, but also an overnight stay. The Jews spent all winter in the hiding place there.

They left their shelter on dark nights to relieve stiff muscles. Winter was long and poor, because Norvaišai people had to share food with unexpected hosts. In the early spring, the sisters Weberytes went out to hide with the family of their familiar Schneiders, and they were also attracted by Kačkelis. Both men remained at Norvaišaitis. As they warmed up a bit, they went out into the woods to set up a bunker for themselves, but continued to get food from the Juozas family.

Alteris and Chaim Norvaišaitis have been in hiding for three years. Sometimes both men had to hide from other people because Joseph was suspected by the local police and constantly watched. The police knew he had helped the Jews and had been home by night, but he had not arrested Norvaišaitis because he had not been able to find any fugitives. Surrounding people helped not only with food but also when needed, hiding refugees from German eyes. Aldona listed the names of her neighbors Šeškaitis, Gerulaitis, Eidiki.

Jewish people – under the skirt

Many events have already been erased from Aldona’s memory, but she also remembers another neighbor, a wealthy farmer who kept coming to their house and shouting in a thin voice, “Give the Jews! Where did you hide? Then give Uršule Norvaišaitienė one hand, lifting up the skirts of the skirt and shouting that she had one hidden under the skirt – a neighbor could come and pick her up. Aldona, a teenager who had learned the same thing from her mother, was fired by the Gestapo police. Now it looks pretty comical, but then it was not funny, the feet, when they saw the uninvited guests spinning in the yard, were shaking with no laughter …

According to the archives of the Yad Vashem Museum in Jerusalem, 1943. Juozas Norvaišaitis was deported to forced labor in Germany. Ursula and her daughter, Aldona, continued to help the Jews in the woods and, sometimes, to hide in their homes. These Jews included sisters Cile and Judith of Vilkaviskis and a young man called Savler. 1944 On August 17, when the Soviet army entered Vilkaviškis, the surviving Jews regained their freedom.

Recognize the righteousness of the nations of the world

After experiencing a real nightmare, people rejoiced. Not only the Jews themselves, but their rescuers, whose families were constantly threatened. Alter Kirkilovsky proposed to Aldona, who was sixteen, but she rejected the offer. The girl told a Jewish woman in her thirties that she had become a brother to her during that time, so there could be no marriage. Alter then settled in Kybartai, married a Lithuanian girl, had children and remained friends with her rescuers. Aldona is still there

Industrial object remains S. Nėries str. 68. Established in 1938. It was belonged to Ulemperl and Starkovsky.  They made various products of metal.

We have a dear friend Molly who has organized a group called “Young Grandmothers” they came from Tel Aviv to hear some stories of Jewish Vilkaviskis. 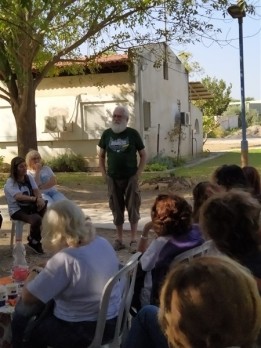 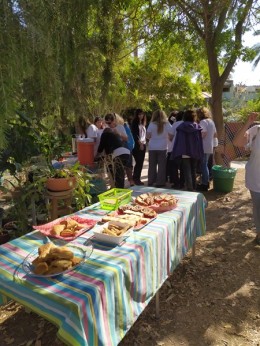